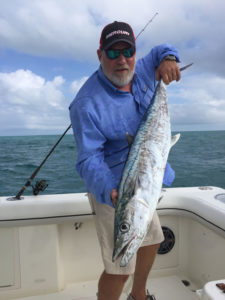 Capt. Mark Schmidt was born and raised in Miami Springs, FL where he grew up fishing the local canals and lakes. At a very early age his father, Rev. Albert Schmidt, introduced Mark to salt water fishing by taking him to Biscayne Bay, Flamingo and the Keys.

After high school Mark went to Furman University on a football scholarship. While at Furman he quickly learned he was much better at hunting and fishing than being a student. Mark left Furman and joined the United States Coast Guard serving on board ship before going into the aviation side of the service. After Mark left the USCG he became a mechanic for Eastern Air Lines in Miami, FL.

Around this time Mark joined the Miami Sportfishing Club, one of the oldest clubs in Miami. There he honed his fishing skills, competing against fellow club members and rival fishing clubs using all types of tackle and techniques. Mark also started guiding on a part-time basis before moving to the Lower Keys full-time in 1982. Capt. Mark has won several tournaments; notably, the Bermuda Invitational Light Tackle tournament. Mark teamed with Robert Trosset and Andy Down to beat out a select field of light tackle anglers first in 1990 and again in 1991.

Rates & What to Bring

I do not like to publish my rates because every outing is different.  I can say that I am very competitive with any of the published rates you will find with my counterparts.

A typical standard outing consists of a full or half day on the water.

Please use the Contact Me form to let me know what you are looking for and I will send you pricing tailored to suit your needs.

At Sun Dancer Charters we can put together just about any experience you want to have.  From fishing to sightseeing, we are here to make sure you have the best Key West ocean experience you can possibly have. Please contact me for rates on custom packages.